I am not a tool collector. I have only one of each tool and if I decide to buy a better model I give away or sell the duplicate.

With one exception: I have a weakness for rebate planes.

Cutting rebates is one of the most common joinery tasks in my work. Other than chairs and carving projects most things I’ve built use them. But I’m yet to find the perfect rebate plane. I’m willing to accept that this might say more about me than it does about the planes. As a result I’ve acquired quite a large selection (we won’t call it a collection – I use them all).

It’s an appropriate time to take this family photograph as some of them will soon be finding new homes. I’ve used all of them enough to know what I like and what I don’t. Let’s look at them by type.

The old school wooden plane by Phil Edwards, the Veritas skew and Stanley 46 are the most sophisticated. They all have adjustable fences, nickers and depth stops.

I have grappled with the Philly Planes moving fillister. The mouth is very tight. I could open it but I’m loathe to mess around with such a recently made plane. The fence works well when set but is easily knocked out of alignment during adjustment and the screw slots are very narrow and require an unusual screwdriver. I can make it work well enough but it requires a bit of fiddling. If I used it every day I’d probably grow to love it but I have easier planes that do the same job.

The Veritas works extremely well and is very accurately made. The bars are dead straight and the fence locks well. My only gripe is that the iron is fiddly to adjust laterally. There is nothing to push it against when securing it so it takes a bit of fettling after sharpening.

The 46 is by far my favourite. The bars aren’t as accurate as the Veritas but the fence and skate are relatively easy to adjust. Because it’s also a plough and dado (housing in English English) plane I use it a lot so I’m more comfortable and faster with it than the other two. It’s not billed as a moving fillister plane but it does the job admirably.

The Lie Nielsen has a fence and nicker but no depth stop. I use it for cleaning up rebates cut with other planes. Because these moving fillister planes are skewed they cut only in one direction. The first three cut right to left and this plane cuts left to right. If I’m cutting a rebate on both side of a panel I’ll use one of the righties to remove most of the waste and then clean up the tear out with this block plane. It doesn’t get used a great deal but is valuable when I need it. I would happily replace it with a straight-ironed block rebate plane. 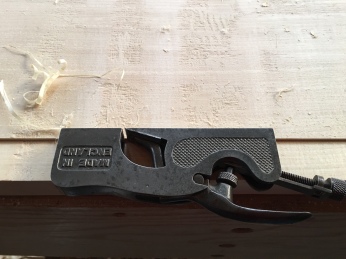 Shoulder planes do other jobs. Some people use them to trim the shoulders of tenons. I use a chisel. Some use them to clean the cheeks of tenons. I use a router plane. I use most of these shoulder planes to clean up rebates. They are all excellent. I could live without most of them but I’d fight to keep the little one. Sometimes it’s just the only thing that works. The great thing about them is that because they have straight irons they cut in both directions. The downside is that they don’t pull themselves into the shoulder of the rebate the way the skewed irons do so it’s easier to get that stepped shoulder if you’re careless. Fortunately they’re great for sorting that out too!

This took a little work. When I bought it (for the princely sum of £4) the sole was crowned at the mouth and not true, the sides were out of alignment, the iron was rusty and curved, the wedge stuck and didn’t contact the iron and the throat properly and the body was strangely sticky.

All of this was solved in an hour. I put the iron in some green goop to marinade while I planed the sole and sides true. A hair off the sides of the wedge and that was sorted. Once free of rust I hammered the iron straight and reground it to fit the now slightly narrower body. No longer is it a 1″ plane but a 61/64″ plane. No fundamental difference in use!

It is, without question, my favourite. Now that the corners are sharp and square they will drop into a gauge line and start a rebate. Because of the angle of the iron (middle pitch, 55º) it cuts well even against most grain. It’s slightly skewed, enough to pull it in to the shoulder but not enough to drag it out of a gauge line. Very handy all round.

You don’t see these every day (I do but that’s because I like the look of it so I leave it out on the carving bench a lot). It’s an odd beast. I use it just as I use the wooden rebate plane above. In fact, if I hadn’t used it quite a lot I wouldn’t have developed the skill to use the woodie in that way. 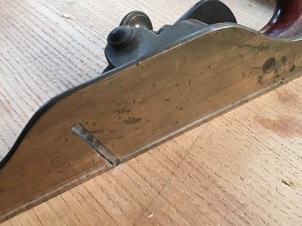 I wouldn’t advocate one of the modern manufacturers resurrecting this design. It’s very prone to jamming. The first tiny spiral shavings come out of the side of the plane. Once you’ve completed the tilt all the way to horizontal the shavings come out of the throat in the usual way. But in between there’s a tendency for thin shavings to jam between the iron and the body. It takes a certain knack to avoid a horrible cloggage.

I will be buried with this tool, having built my coffin with it. It does a job none of the others can do: go round corners. It’s also a delight to use. Easy to sharpen, easy to adjust and relatively easy to push (harder to pull). So long as you don’t expect heavy shavings it will work all day. Tom Lie Nielsen, Rob Lee, are you listening? Please make this again.

Putting the 71 aside which would I keep if the bailiff came calling and I could save only have three? 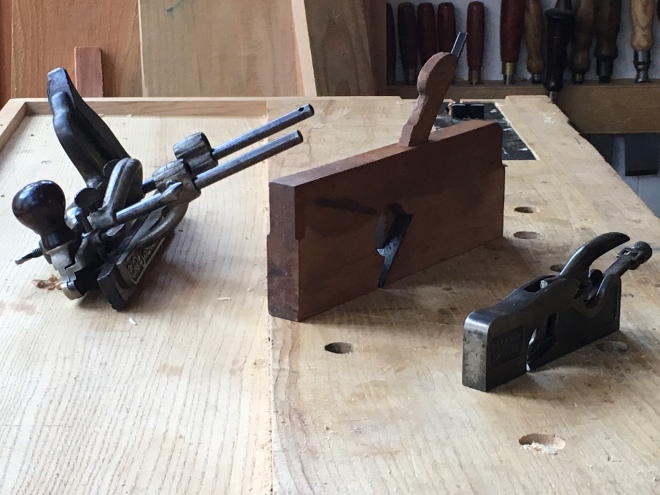 The 46, the woodie and the lovely little Record 41. Not too extravagant, I feel. Odd to find myself writing that I prefer these old, slightly cranky tools over the perfectly machined Veritas and Lie Nielsens.

And if I could have only one?

I really could get away with just one rebate plane. So long as it’s the cheapest of the bunch!

Is there anything better out there?

I would really like something that doesn’t exist. A wooden, 1″, straight-ironed, middle pitch rebate plane with a boxwood sole to provide some protection against using  it on its edge. I wonder if Phil Edwards would make me one?